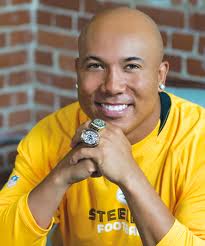 Eight years ago, when former University of Georgia Football standout and Super Bowl XL MVP with the Pittsburgh Steelers, Hines Ward, was getting ready to retire, Cobb-County businessman Scott Pederson approached him about a unique idea. The concept was awarding student-athletes differently than the traditional “performance-based” model that only 2% of student-athletes were capable of achieving.  Wouldn’t it be great to have an awards program that focused more on athletes who were overcoming difficult circumstances (illnesses, injury, home life), or giving back to their schools and communities in significant ways?  Wouldn’t it be great if there were awards that 100% of the student-athletes would be eligible to receive?

That idea, birthed in Cobb County, is called Positive Athlete, and it is now a national program and an important staple in high schools throughout the country.  In Georgia alone, over 400 of the 482 high schools will provide Positive Athlete 5,000+ nominations in 2019.  The local sports community has embraced this movement by providing free tickets to games, interaction with their stars, and involving them in their pregame ceremonies.  The Atlanta Braves, for example, provided each of the 5,000+ nominees with 2 free tickets this year.  And over $150,000 in college scholarships have been given away in Georgia through the Positive Athlete Fund at their annual awards at the College Football Hall of Fame.

Positive Athlete not only provides scholarships and recognition opportunities to these students, they are giving these kids something to put on their resumes that will strengthen their college applications and open doors for future employment.  Major companies like Delta Air Lines are starting to contact Positive Athlete to inquire about these high-character, teamwork-oriented leaders.

CNN Sports loves this program so much, they now do weekly features on Positive Athletes throughout the country in an effort to inspire other high school students to emulate these kids who at an early age are demonstrating the importance of giving back to their communities.

By supporting the Positive Athlete Foundation, you are helping grow this important movement to not only encourage positivism in our schools, but to inspire a generation of young people to give back to their communities as they enter the business world. Imagine what a world of Positive Athletes can do to change the culture in our country and around the world!