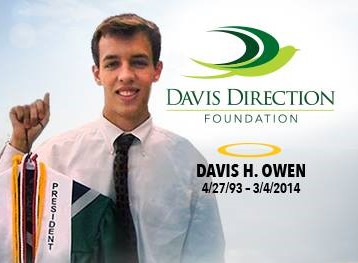 Asked to put her personal mission into just a few words, Missy Owen says, “My child died. Yours can live.”

On March 4th, 2014, the doorbell rang and the detectives told Missy and Michael Owen that their precious son had been found dead in his car due to a suspected heroin overdose. Davis was the oldest son of their five children. He loved unconditionally and sought to make others happy. He was president of his senior class, Hall of Fame in his high school, a chosen leader, an honor student, and an awesome friend to all who knew him. Davis was also overwhelmed with stress in his life and turned to opiates in the family medicine cabinet. His opiate addiction led to heroin and ultimately took Davis’ life.

Two weeks later, the Owens established the Davis Direction Fund at Cobb Community Foundation with a stated charitable purpose to “educate people and support families dealing with heroin addiction.”  They weren’t certain exactly how that mission would manifest itself, but they knew that would become clear over time, and when that time came, they would be ready.

That clarity came, and on September 29th, 2016, the Davis Direction Foundation (DDF) held the grand opening of The Zone. DDF’s mission is to Fight Addiction and Fuel Recovery, while serving as the national model for Building Communities of Recovery. The Zone, an extension of DDF, is a Recovery Support Organization (RSO) that mobilizes resources to make it possible for the recovery population to find long-term recovery. Cobb’s first and only recovery support organization, The Zone is open from 9:00 am – 9:00 pm, 365 days a year and offers support and resources to people who are deep in the throes of addiction or who are working daily to support their recovery.

By early 2020, Cobb County had begun a downward trend in the number of deaths due to overdose. But when the opioid epidemic collided with the global pandemic in March of 2020 and Cobb County was ordered to shelter in place, isolation and a devastated economy created the perfect storm for people in the recovery community. Even before the Delta variant became prominent, COVID-19 had already led to a 30% increase in drug overdose nationally according to the CDC, a number matched in Cobb County according to the Cobb County Medical Director. Connection is said to be the opposite of addiction, and virtual connection was hardly the answer to take the place of face-to-face interaction.

The support offered through The Zone was critical, and as a result, it was declared a “First Responder” by Cobb County. The nonprofit expanded its services to 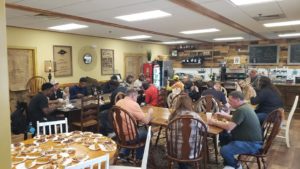 include 3 meals a day, distribution of USDA food boxes provided through the Food Fleet, increased clothing vouchers, virtual recovery services, and an increased number of nationally designated Recovery Coaches. The Zone also joined a Continuum of Care Coalition of Nonprofits where working collectively, these organizations were able to make sure our community members were well taken care of.

This time of year, your support is needed now more than ever. The Holidays are particularly hard for people who have addiction history and even moreso for those who have had to distance themselves from their families. The Zone becomes home to them. The Zone becomes their family. At Thanksgiving, Christmas and New Year’s, The Zone makes available “36-hour rooms” so that no one has to be alone on a holiday.  The 36 hour rooms offer companionship, round the clock recovery support meetings, a place to stay overnight, a Thanksgiving Feast, a Christmas Dinner and a New Year’s Day traditional dinner.

You can help make sure that the resources are available to pay staff and take care of other expenses for these 36-hour rooms during the holidays and to fuel recovery and fight addiction all year long with your tax deductible contribution. Click here to donate.