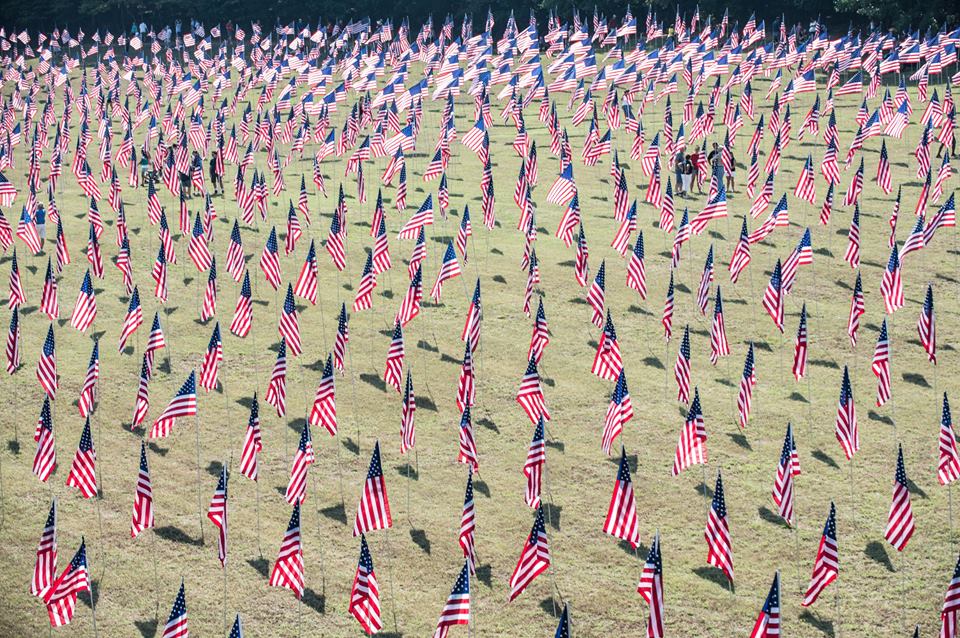 Cobb Community Foundation is proud to hold and manage charitable funds for many local service clubs.  In 2004, we officially began our partnership with Kiwanis Club of Marietta; that was one year after the club installed its first Field of Flags.  This year will mark the fifth recurrence of this solemn remembrance of the 2,977 innocent lives lost on September 11, 2001.

The Field of Flags came about as a natural outgrowth of the Kiwanis Club’s Flag Project, where club members deploy over 1,700 large American flags around Marietta Square and throughout the community on six patriotic holidays each year. In 2003, Devan Seabaugh, president of the club at the time, and the late Glenn Graham, the club’s chair of the Flag Project, conceived of a “field of flags” to honor those who perished in the Sept. 11, 2001, terrorist attack.

Deploying almost 3,000 flags with its $30,000 budget and complex logistics, seemed a gargantuan task, but Seabaugh and Graham found club members and friends throughout the community ready and willing to take on the project. A couple of anonymous Kiwanians underwrote the funding. Others worked with officials at Kennesaw Mountain National Battlefield to meet the National Park Service’s requirements to use the site for the tribute. Club member Sam Kelly and Cobb Electric Membership Corporation provided nighttime lighting. Flagpoles were donated by Mark Wade and Wade Electric, and club members began to sell flags to defray costs.

Kiwanian Trent Turk of GeoSurvey Land Surveying recognized the challenges of placing thousands of large flags across the nine-acre site in an organized pattern. Using state-of-the-art surveying equipment, his staff marked the battlefield into grids and the placement of every flag was planned. 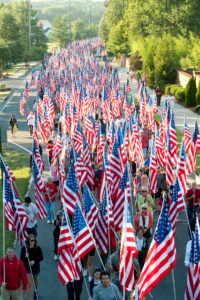 At sunrise on Sept. 10, 2003, volunteers pounded in almost 3,000 four-foot sections of rebar to serve as stands for the 10-foot flagpoles.  Later that day, Kiwanis Club of Marietta members led a solemn community procession, carrying the flags to the field where they were installed in neat rows. The following day, Sept. 11, the club held its regular meeting outdoors against the backdrop of American flags waving in the breeze, and a tradition was born. The club committed to recreating the tribute to 9/11 victims every five years.
Leading 2021’s 20th anniversary Field of Flags are co-chairs Councilwoman Michelle Cooper-Kelly, Frank Mims, Jamie Vann and a large Field of Flags Volunteer Committee.  Each innocent life lost to the senseless tragic events of September 11, 2001, will be honored by the 5th Field of Flags installation. This powerful commemorative event begins on Saturday, September 4th and will be open to the public until Saturday, September 18th (flag removal will begin that morning). Kiwanis Club of Marietta invites you to join as we remember and honor those who lost their lives that fateful day.

For more information or to volunteer, visit www.911fieldofflags.com.

To learn how we can help your service organization fulfill its mission, please reach out to us at CCFTeam@cobbfoundation.org or call 770-859-2366.